An Update on Stream Restoration Efforts

We have received a lot of questions about the stream restoration project going on here in Columbia. Specifically, stretches of stream from Eliots Oak Road to Hesperus Drive, from Eliots Oak down to Faulkner Ridge Circle and south of Little Patuxent Parkway look much different than they used to. You can see the areas affected by this work on the map below. 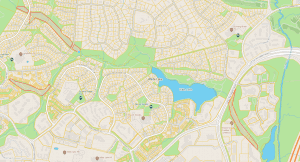 We first explained the benefits of this stream restoration project a few months ago, before construction equipment came in and trees were removed. Columbia Association’s (CA) Open Space team has some updates to share as we head into the next phase of this work.

Watershed Manager John McCoy has been following the progress on this project since it began. It is one of the larger stream restoration efforts that has taken place on CA’s Open Space. The aesthetics of this part of the project are not lost on McCoy and his team. That said, the long-term environmental benefits are substantial for the stream, our lakes and the Columbia community at large. Plus, the $2.2 million project is being paid for entirely by the state.

The main factor McCoy and crews with Ecotone (the company hired by the State Highway Administration to transform this into a healthier stream system) are trying to combat is erosion. The goal is to restore the stream to a more stable state, which means slowing down the flow and flattening out the steep banks that had been created over time.

This not only returns the waterways in that immediate area back to their original form, but it also prevents sand and sediment from being carried downstream. That material eventually ends up in Wilde Lake and Lake Kittamaqundi, creating the need for large-scale dredging projects. Being proactive with stream restoration efforts limit the potential need for those more expensive, reactionary undertakings in the future. This project in particular is expected to reduce the amount of sediments going into Columbia’s lakes by 30%.

McCoy explains the progress on the stream restoration project firsthand in this video.

What McCoy refers to as the construction phase of the project is complete. It’s important to remember that just because a waterway is attractive does not mean it’s the healthiest it can be.

Think about this: Before there was any widespread development in Columbia, our waterways flowed very differently than what we’re used to. Stream edges were naturally graded out so water could overflow onto the land during a rain event, unconfined by steep banks. 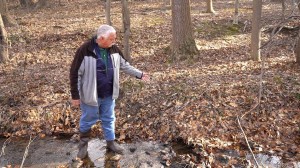 McCoy gives the example of the stream system in the Howard County Conservancy. As he points out, you can see that waterway has: 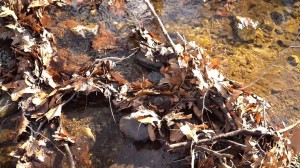 “This is what bugs live under. The bugs feed the fish and the fish feed the mammals and the birds, so it’s a healthy system, and it isn’t all that clean in appearance. It does appear to have a little bit of debris in it, but this is what a healthy stream system looks like.”

Yep, just like us humans, the animal food chain prefers a more solid foundation to their home.

When the project began in the Harpers Choice area, there was a significant drop off into the stream rather than an optimal, gradual slope. McCoy says crews are trying to recreate “flood plain benches” like the ones by the water at the Conservancy so the stream isn’t confined to the steep, eroded banks it was held to before. 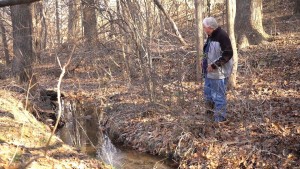 How do you rebuild a healthy stream

When you complete a renovation on your home, there’s often that moment of mess when a homeowner wonders, “Why did I do this?” It is safe to say that some of those who live and work around this project are in that stage right now.

That said, rebuilding anything often takes some tearing down before building up. To restore this stream for the betterment of our community and the nature we’re working to preserve, McCoy points to a number of tools that may seem random, but are actually intentional and useful for creating a wonderful environment in the future.

If you look into the stream bed, you may notice rock of all shapes and sizes. That gravel, McCoy says, is an essential part of stabilizing the stream and providing grade control.

Smaller rocks will keep the floor in place, especially now that sand is not the primary material sitting at the bottom of the stream. Bigger rocks create elements that dam up water and cause it to pool.

The optimal set-up for streams like this one includes what are known as riffles. You might describe them as little rapids. These sections of rock allow for a steady gradient between each pool. McCoy estimates the riffles in the stream are now allowing the water to drop about 18 inches, but in a much more controlled way. What you’ll likely see along the stream is a riffle, then a pool, another riffle and pool, followed by – you guessed it – a riffle and a pool.

Additionally, the rocks also provide an optimal home for insects, and where there are bugs, other wildlife is bound to follow.

There are a few ways Ecotone has been utilizing tree trunks and roots to create new features and help the stream get back to its natural state.

First, large masses of root systems are being held in by fiber mats along the banks of the stream. Why? McCoy says that helps to naturally stabilize those banks until plant material has a chance to grow. It also will help when the current picks up.

“Those root wads help break that force up and reduce the erosive nature of it,” McCoy said.

McCoy says the root wads also make for a nice habitat for fish and other aquatic life.

Second, tree trunks have been methodically laid across the stream to act as what’s known as a spreader.

“When the creek rises to the point where water is in contact with this log, the water begins to flow laterally into the flood plain, and this is used to help get water out into the flood plain, push it out,” McCoy said. “This is one of the primary objectives of the whole project. We’re trying to reconnect this stream to its flood plain.”

Third, just like the large rocks, logs buried in the stream channel for additional grade control.

It’s important to note that CA plans to plant over 1,000 trees in the area surrounding the stream. While it will take time, we are excited to witness the growth of this new forest with the neighbors that cherish the area.

How is the area a floodplain if the old stream didn’t overflow very often? Well, Howard County has designated the land around the stream as a floodplain, which speaks to the need to recreate the space and let nature do what it was intended to do. The process slows down the water’s flow, allowing sediment to drop out.

“When this project was just starting up, this stream had three-foot banks. They were straight cut down, and the stream had cut down far enough that during a moderate storm event, it would not rise up and get out into the flood plain.”

Additionally, McCoy says wildlife habitats will be improved by restoring the stream back to its more organic element.

What’s next for the stream

Any construction in the area should be completed within the next two to three weeks, weather permitting. While a lot of the woody debris on the site is advantageous to future natural habitats, McCoy is also continuously working with the company to remove some of the unnecessary debris neighbors have been concerned about.

Live stake planting will begin in mid-February followed by the planting of all kinds of native species of shrubs and trees. Then, tree and shrub planting should happen in March or April depending on the weather (see chart below for the number of trees and shrubs we expect to plant). After that, things should green up in time for spring, bringing even more diverse habitats and wildlife in the years to come. Ecotone is responsible for monitoring and maintaining the area for five years, but CA will be active in the space as well, working on deer browse control and helping to ensure plantings are successful.

How to Make the Most of Fall Colors in Columbia
September 30, 2022

Every Day is Energy Efficiency Day at CA
September 29, 2022