While we often see women perform on the ice, it’s extremely rare to see them on the operational side. In fact, there’s only one full-time female Zamboni driver in the entire NHL.

At Columbia Ice Rink, it’s a different story — there are not one, but five women behind the wheel. In the spirit of Women’s History Month, we’d like to shine a spotlight on Columbia Ice Rink’s inspiring women-dominated crew: Belinda Bryant, Rachel Gorton, Cynthia Boyles, Kaitlyn Frost and Andrea Burke. 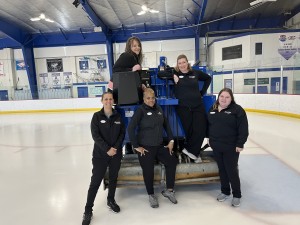 First things first: Driving the Zamboni is way harder than it looks. It takes time, patience and skill to transform the ice into a flawless sheet after figure skating or a hockey game.

“The Zam is a square box in a circle, so you have to respect it,” says Andrea. “We have to keep and maintain the same speed we started with. It’s a dangerous job. There’s no braking on ice.”

Belinda compares the Zam to a Ford F350 with a double cap, but flipped around so the truck bed is in the front. “Everything in front of you is empty until you fill it with some ice,” she says. “It’s front heavy, with tons of blind spots. Imagine trying to drive a 10,000 lb. machine on the highway that close to a guardrail!”

There’s intense multitasking required too, from adjusting the water levels to turning the blade. It’s an extremely expensive machine that’s not easy to fix or replace, and Zam drivers need months of training before operating it.

“Most people don’t realize how much training it takes to to be able to resurface the ice in 10 minutes and make it look easy. The ice is not flat. There’s no stopping, there’s no backing up,” says Belinda. “When someone admires the ice, it’s a sense of pride that makes all the hard work worth it.”

“We truly view Zamboni driving as an art. There’s been times we’ve been here for 15 hours trying to get the place ready for the public to enjoy. We do everything in our power to make the ice look amazing.” -Kaitlyn

The women-dominated team isn’t the only thing that sets Columbia Ice Rink apart. In 2009, they were the first rink in the state to invest in a battery-powered Zamboni. Other rinks across Maryland have only just begun to adopt this greener option.

Without harmful fumes, the battery-operated Zams are much safer for humans and the environment — it’s essentially “the Prius of the Zamboni world.”

“It’s very, very powerful, more powerful than the gas or propane powered options,” says Kaitlyn. “It’s our baby Big Blue, also known as Bubba Blue. You have to talk nicely to it, clean it, grease it, wax it, change the blades.  Without the Zam, there’s no fun on the ice, so I’m always telling it, “C’mon, you can do it.’” 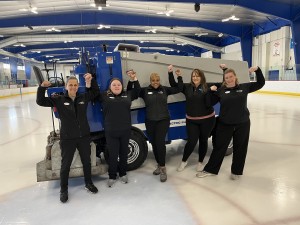 Regardless of how they found the ice, CA’s women Zam drivers all agree: Columbia Ice Rink is a family.

“Our skaters know us by name, and we know them,” says Rachel. “It’s pretty special.”

“I’ve been in the athletics industry for 20+ years. I’ve never seen a facility in the industry with so many females unless it’s women-owned,” says Belinda. “CA offers something many other organizations don’t: the family aspect. Our team members come and stay, and that’s extremely telling to me.”

“I joined the team when my daughter began ice skating, and it was the best decision of my life. This place is amazing,” says Andrea. “For any woman whose interested in being a Zam driver, I’d encourage you to let yourself be known and seen. Wave at the crowd. Honk at the little kids. Have fun!”

“This place has been like therapy for me since retiring from my job in law enforcement. I say I’m skating into retirement,” says Cynthia. “If there’s something you think you’re interested in, regardless of if it’s traditionally male-dominated, just try it!”

Want to learn more about the strong and inspiring women that make up CA? Check out our blog post to hear their stories.

Bike From Your Village to the Lakefront
June 7, 2022

Ways to Celebrate Black History Month in Columbia
January 28, 2022
Try Us For Free