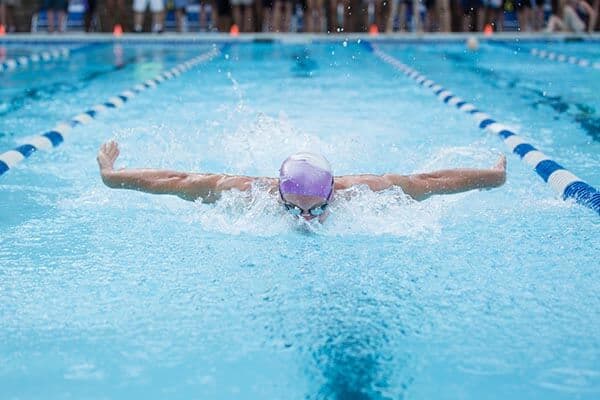 For more than 40 years, the Columbia Neighborhood Swim League has been a tradition, a rite of passage for kids throughout Columbia.

Like other swim leagues, there’s the competitive aspect, with kids racing against their peers for the best times, earning points to help lead their team to victory. But what really sets CNSL apart is an emphasis on community, sportsmanship and inclusion.

It is what brings swimmers and their families back year after year, draws former swimmers to return as coaches, and has some parents watching as their kids race in the same pools they once did.

Stephanie Martini first swam with CNSL when she was 5. Now her son and daughter swim for the Thunder Hill Lightning, and Martini is a parent team manager.

“All the fun I remembered is still there,” Martini said.

Yes, there are ribbons for the fastest times, recognizing kids who come in first through eighth place. But you don’t have to be the quickest of swimmers to leave feeling like a winner.

Children receive ribbons for participating in the meet, and they also have opportunities to earn purple ribbons for improving their lap time.

“The purple ribbons give an opportunity for kids who don’t swim year-round to have their moment under the sun,” said parent team manager Sandy Messina.

Swimmers are also given special recognition when they age out of the program at age 18. The graduating swimmers are announced during their last meets, and special activities are planned as a celebration.

The teams tend to feel like families. Everyone is there to support each other, rooting their teammates on and helping them improve.

“CNSL has a mentoring program where new swimmers are paired with more experienced swimmers,” Messina said. “The new swimmers just idolize these big kids, and it really helps them grow in the sport.”

Kids aren’t just learning how to swim faster, though. They’re also taught values such as sportsmanship, according to Susan McDonald, operations supervisor for CNSL and the Columbia Clippers Swim Team.

“We teach kids how to handle things when they do well — and also when they don’t do so well,” McDonald said. “We teach them about setting goals and achieving those goals.”

Swimmers shake hands with their competitors at the end of each meet and cheer their competitors on. Avery Bazell said that the positive and energetic environment has always been a trademark of CNSL since she began swimming at the age of 4 for the Pointers Run Piranhas. She continued as a swimmer until aging out at 18 and now coaches the team she grew up with.

“The coaches were always great at creating a positive, inclusive environment,” she said. “And that’s the environment I work to maintain.”

Fun beyond the pool

Every team holds pep rallies on Friday nights before the weekend’s meets. These rallies often have themes, which can range from movies to superheroes and everything in-between. Teams may also host activities such as face-painting and creating noise makers for the next day’s competition.

Charity events and fundraisers are also a staple of the summer season. Teams may swim laps for their charity of choice or hold a movie or restaurant night.

Martini said that coordination of those events is easier today than when she was a swimmer, thanks to email and social media.

“There’s been a lot of growth, but the same sense of community and inclusion is still there,” she said. “It’s what makes CNSL the ultimate summer family experience.”

Help your kids make the most out of a day off with CA’s School’s Out programs
September 24, 2018
New Membership Special Offer