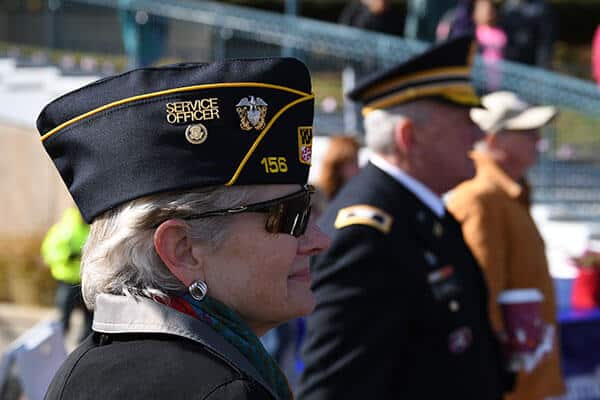 This year’s Veterans Day Parade will be held in Downtown Columbia.

This year, Howard County’s annual Veterans Day Parade will take place in Downtown Columbia, joining up with Columbia Association’s yearly event to honor both those actively serving in the U.S. armed forces as well as the more than 20,000 veterans who call Howard County home.

The parade will begin at 9:30am. It will start at Merriweather Post Pavilion Parking Lot 2 (near Broken Land Parkway), continue along Little Patuxent Parkway and concludes at the Downtown Columbia Lakefront.

A ceremony at Lake Kittamaqundi will follow at 10:45am, featuring remarks from veterans and other local leaders, music, a Color Guard provided by Atholton High School’s JROTC, and a performance by the Columbia Center for Theatrical Arts’ Young Columbians.

There will be free hot chocolate, coffee and bakery items provided by event sponsors Clyde’s of Columbia and Whole Foods Market. Flags will be available for children, courtesy of Columbia Association. Additional food can be purchased from nearby food trucks.

The parade is normally held in Historic Ellicott City. It has relocated just for this year while the community continues to rebuild from the damage caused by the May flood.

“I want everyone who lives here to understand that this is the greatest nation in the world, but that our liberty and freedom isn’t free,” said parade planning committee member Col. Ed Hall, who also is commander of American Legion Post 156 and the Howard County Joint Military Council. “Someone pays the price, and we should be thankful for those who do. That’s what Veterans Day is all about.”

Hall joined the military as a teenager in 1969, entering Virginia Military Institute. As a Marine, he was later sent to Vietnam as part of Operation Frequent Wind, which evacuated American civilians and others from Saigon in 1975. Hall continued to serve afterward, leaving after a total of 23 years.

“I’m grateful when non-veterans take the time to come out and thank veterans for their service, and they really mean it,” Hall said. “I don’t expect everybody to be in the military. But I appreciate those who haven’t shown such respect for those of us who have.”

Hall was joined during this interview by Col. Lou Schott, a 98-year-old Howard County resident who, 73 years ago, was a rifle company commander during the Battle of Okinawa in World War II. Schott led 150 Marines during that battle and walked out months later with just 16 of those who had originally joined him, according to Hall.

Schott is a regular at events honoring those who have served. He says the events leave him feeling inspired.

“It makes me conscious of what happened in our past and how much we owe those who put the uniform on for the United States,” Schott said.

Veterans Day is recognized each year on November 11, coinciding with Armistice Day, which itself commemorated the end of fighting between the Allies and Germany in World War I. The armistice took effect in the 11th hour of the 11th day of the 11th month in 1918 — which means this year will mark the 100th anniversary of the end of the war.

And when the clock strikes 11:11am on November 18 at this year’s Veterans Day event, the ceremony will pause.

“Wherever we are,” Hall said. “we will stop and plays ‘Taps’ to remember those veterans who have given the ultimate sacrifice.”

July 4th Festivities: What to Expect
June 8, 2022
Go to Top
Upcoming holiday hours for all CA Facilities have been posted   View Holiday Hours