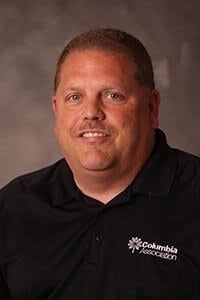 John Bannon has more than 30 years of martial arts experience and has been teaching for 28 years. John began The Columbia Martial Arts Academy over 20 years ago at the Columbia Athletic Club with less than 10 students. John is the head instructor of The Columbia Martial Arts Academy. He is also The Martial Arts Director for the Columbia Association (CA), overseeing all martial arts programs within CA. Outside of CA, John served as the former Maryland Director of KickUSA. KickUSA is a non-profit organization that promotes the positive benefits of martial arts to youth. He is also a national referee within the organization. Outside of the martial arts, John enjoys watching football and spending time with his wife and three boys.

“I feel that the martial arts help build positive qualities including discipline, respect, confidence, concentration, leadership, integrity and perseverance. Anyone, no matter what their ability or skill level is, has the opportunity to achieve success in the martial arts program.”

Try Us Free for 3 Days