Columbia is a well-known example of the New Town Movement in the United States. It shares similarities with Reston, Virginia; The Woodlands, Texas; Irvine, California; and others. But Columbia stood out in its innovative approach to planning, which included a six-month period of interdisciplinary meetings bringing together experts in fields as diverse as education, recreation, sociology, transportation and religion, as well as architects and engineers. Columbia was also unique for its purposeful goal to be an integrated community at a time before the Fair Housing Act of 1968 made it illegal to discriminate in housing based on race, color, national origin or religion.

The Exhibit Center that opened downtown in 1967 depicted the story of Columbia in an exhibit titled “The Next America.” It served as the pronouncement of a vision for a better city: a blend of the best of city and country living that could provide answers to problems found in major cities and suburbs. 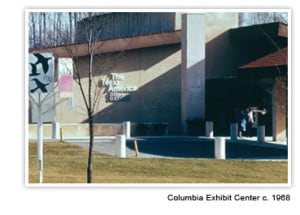 Fifty years later, Columbia is a thriving unincorporated community of nearly 100,000 people that by many measures is one of the most successful models of New Town development and a highly desirable place to live — the No. 1 small city to live, according to Money Magazine in 2016. Columbia was developed by Howard Research and Development (HRD), a subsidiary of The Rouse Company, led by founder James Rouse. The community grew out of Rouse’s belief that private developers could plan and build an environment that nurtured the growth of people.

Rouse had been interested in cities and suburban sprawl through much of his career. His work with the Eisenhower Commission on Housing, The American Council to Improve Our Neighborhoods (ACTION) and the Greater Baltimore Committee, as well as his businesses of mortgage financing and suburban shopping center development, had produced many ideas about how people live and thrive.

“We must hold fast to the realization that our cities are for people, and unless they work well for people they are not working well at all,” Rouse said in a 1959 speech to the Newark Conference on the ACTION Program for the American City. “We should think and plan and program, not in terms of schools, highways, streets, stores, offices or even dwelling units. But we should begin our total plan and program with the first and fundamental purpose of making a city into neighborhoods where a man, his wife and family can live and work and, above all else, grow — grow in character, in personality, in love of God and neighbor and in the capacity for joyous living. Isn’t this the legitimate target of our civilization? Isn’t this the only proper target for an effective city?”

In 1961, Rouse consulted with members of the Rockefeller family about a potential community on land they owned in Pocantico Hills, New York. The project was abandoned, but the ideas led to more concrete thinking about building a city and were realized in the development of Cross Keys, a small mixed-use community in Baltimore.

By 1962, planning for Cross Keys was in full swing, and Rouse was looking ahead to something bigger — a large enough area to build a real city. A top criterion was a location between two metropolitan areas. There were several options, including land in the Baltimore-based company’s backyard in Howard County, Maryland, located midway between Washington, D.C., and Baltimore, one of the fastest-growing regions in the country. The purchase of 1,039 acres in November 1962 started a fast-paced and necessarily secretive land acquisition. On Oct. 30, 1963, Rouse announced to Howard County officials and residents that his company had acquired 14,000 acres and planned to build a city. 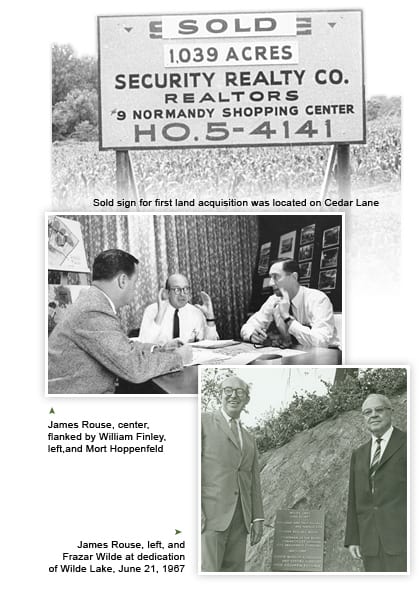 In November 1962, about the same time as the first land purchase, Rouse hired William E. Finley to head the planning and development of the new town. Finley had been director of the National Capital Planning Commission (NCPC) in Washington, D.C., that had just issued its report for the future of the region. Finley, in turn, hired the chief designer at NCPC, Mort Hoppenfeld, to be chief planner for Columbia.

The first step to the success of Columbia was an arrangement with Connecticut General Life Insurance Company. Under the leadership of Frazar Wilde, Connecticut General invested $23 million and joined The Rouse Company in forming Howard Research and Development to develop the new city. Rouse acknowledged the importance of Connecticut General’s commitment by naming the lake and village of Wilde Lake after Wilde.

A month before the October 1963 announcement of the land acquisition and intention to build a city, Rouse delivered a speech at the Conference on the Metropolitan Future at the University of California at Berkeley (click here to download speech or listen to audio). He had been asked to deliver a keynote address at this conference, which was one in a series on California and the challenge of growth. No one outside of Rouse’s inner circle knew about the plan to build a city. Rouse has said that being asked to speak made him focus on the task ahead. His speech outlined a philosophy that would soon form the basis of the Columbia planning process. 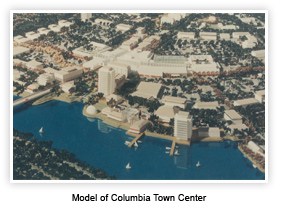 Detailed planning for the new city proceeded from October 1963 to November 1964 with a team that became known as the Work Group. Rouse recruited nationally-known experts in a wide array of disciplines to look at the possibilities — the optimum way to develop a community that would work best for the people who were to live there. They determined the most important social and institutional components of this new city and how these components might best be reflected in the physical environment. 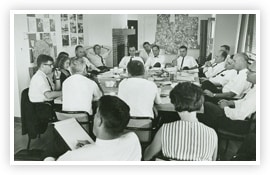 On Nov. 11, 1964, James Rouse made a formal presentation to officials of Howard County. He provided officials with a comprehensive 51-page booklet that set forth the goals and general ideas for how the city would be designed. It addressed zoning, land uses and density. It introduced the village and neighborhood concept, plans for business and industry, recreation and open space and the Town Center. In fact, the key physical part of the presentation was a model of Town Center, which left no room for misunderstanding that the plan was for a city and not just another suburb.

In August 1965, Howard County lawmakers passed “New Town zoning,” a code that had been written by county planners and Howard Research and Development so as to allow the plan to go ahead. 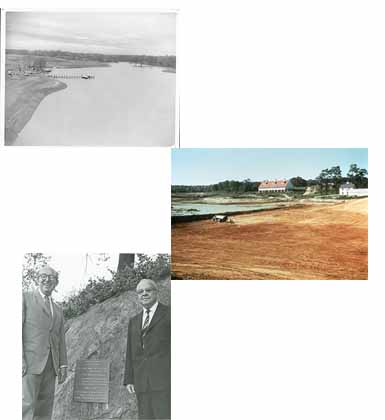 Construction began in June 1966. Two lakes — Kittamaqundi and Wilde— were carved out of fields. Ground was broken for the first commercial buildings in Town Center and the residential neighborhood of Bryant Woods. The dedication ceremony at Wilde Lake was held a year later, on June 21, 1967, marking the beginning of Columbia. The first residents began moving into Bryant Gardens apartments and single-family homes on Rivulet Way and Catterskill Court in the village of Wilde Lake.

The development of Columbia was guided by four basic goals:

Today, those elements are in place. Columbia has more than 36,000 residential units ranging from subsidized apartments to single-family homes. There is a strong economic base, with more than 91,000 jobs. As planned, there are numerous institutions, organizations and private enterprises to serve the community, including Howard County Library, Howard County General Hospital (part of the Johns Hopkins system), Howard Community College, performing arts spaces, movie theaters, restaurants, hotels, and retail options.

As an unincorporated community it is governed by Howard County, but at its core is Columbia Association, which manages many of the services and amenities. Columbia has achieved racial and ethnic diversity. According to 2010 statistics it is approximately 57 percent white; 25 percent black; 11 percent Asian; and with 9 percent identifying themselves as Hispanic or Latino. Three interfaith centers housing multiple congregations, plus more than 41 other congregations, reflect the multi-faith population.

2. To respect the land. Rouse believed strongly that “there should be a strong infusion of nature throughout a network of towns; that people should be able to … feel the spaces of nature all as part of his everyday life.”

This belief led to open space integrated into the community rather than having green space merely encircling the developed areas. It led to the creation of three manmade lakes, an extensive pathway system, playgrounds and parks and dedicated natural areas allowing habitats for birds, waterfowl and other animals. Columbia Association owns and maintains the open space, ensuring that people have the opportunity to experience nature. 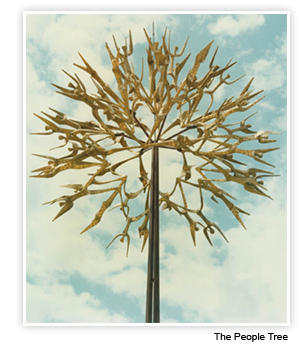 Fulfilling this goal began with the neighborhood and village design, replicating the scale of small towns and providing a platform for citizen involvement. Columbia’s developers included other design elements (including village centers, neighborhood pools and a pathway system) and committed to the growth of high quality institutions and organizations, all as part of a philosophy that would create a greater feeling of community.

The People Tree is the symbol of Columbia and perhaps best illustrates the realization of Rouse’s desire to offer opportunities for personal and community growth. The outstretched arms represent the individual’s ability to reach out to be the best that they can be, and the linked feet symbolize the strength created by people working together to form communities.

It took a long time, but Columbia proved to be profitable for the developer. Howard Research and Development purchased Connecticut General’s share in 1985 and substantial profit from the development of Columbia began to be realized by 1986. In 2004, General Growth Properties purchased The Rouse Company in a deal valued at $12.6 billion. Nearly all of General Growth’s Columbia holdings have subsequently become a part of Howard Hughes Corporation. 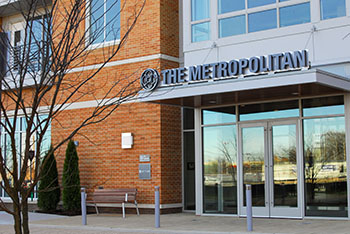 It is generally agreed that Columbia has met its four goals and is considered a success both by those who live here and those who study planned communities. Columbia celebrated its 50th birthday in 2017. When Columbia started and was first touted as “The Next America,” there was the promise of a city that would grow and lead the way to better places to live. While it basks in success, Columbia still faces some challenges to keep it moving in a forward direction. One is the development of a true downtown. In 2004, Howard County began a process to develop a master plan for Downtown Columbia. 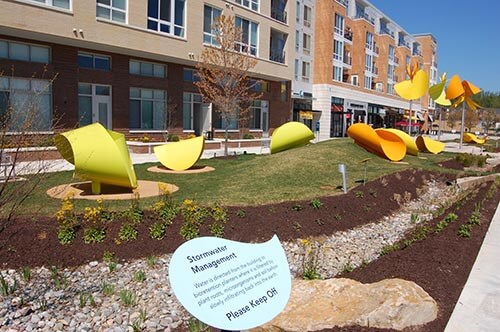 That development is now underway. Beginning in 2014 with the adaptive re-use of the Frank Gehry-designed former headquarters of The Rouse Company as Whole Foods, the downtown is showing signs of meeting the goal of a vibrant city center. Mixed-use buildings adjacent to The Mall in Columbia provide city living space as well as restaurants and other services. Howard Hughes Corporation, as the primary landowner in downtown, has completed two major office buildings in the 391-acre Merriweather District and has more in the planning stages.  Merriweather Post Pavilion, the popular music venue that gives the district its name, is in the midst of a major, multi-year renovation. Merriweather Park at Symphony Woods, a 40-acre park that abuts the pavilion and the district, includes the new Chrysalis, a unique venue for arts and cultural offerings.

Creating a more walkable/bikeable downtown is an important component of the development plan.  A multi-use pathway now links 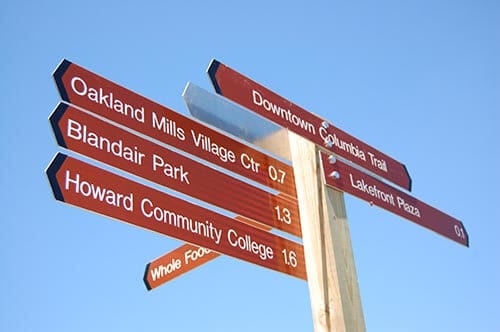 Howard County General Hospital and Howard Community College to the Merriweather and Lakefront Districts and across Route 29 (Columbia’s major highway) to the village of Oakland Mills and the 300-acre Howard County-owned Blandair Park. Bike share stations dot the path.

When Wilde Lake was dedicated in 1967, Rouse remarked that he hoped Columbia would never be finished, that the community would continue to develop and that the residents who would come to call Columbia home would be actively engaged in the process. That has proven to be true — and the history of Columbia is an ongoing story.

Columbia Archives is a service of Columbia Association