James Rouse Made A Difference in the American Landscape 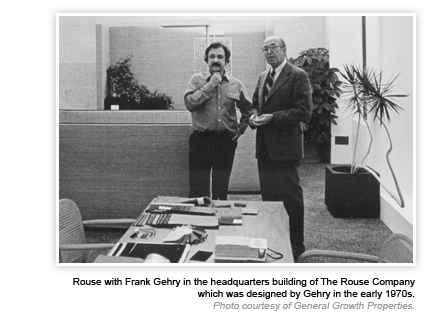 When we marvel at the complexity of the American city, much of what we see can be traced to the influence of a single man — James W. Rouse. And more than any other individual, Rouse’s extraordinary vision helped shape the American landscape during the second half of the 20th century.

As a real estate developer, Rouse (1914-1996) applied a philosophy of optimism to everything he touched. He designed the racially-integrated city of Columbia from the ground up, coined the term “urban renewal,” assembled creations that few Americans had seen before — shopping malls, planned communities, downtown “festival marketplaces”— and landed on the 1981 cover of Time magazine.

And that’s just the short list! Even in retirement, Rouse couldn’t turn off his propensity for charting a better future, and he launched a nonprofit foundation to create affordable housing for the poor.
Although Rouse died more than two decades ago, his vision lives on in the cities and suburbs where we still live, work and play. To uncover the full, fascinating story behind Rouse’s legacy, check out Better Places, Better Lives: A Biography of James Rouse (Urban Land Institute, 2004, ISBN: 0-87420-919-6) by Josh Olsen, which can be purchased here.