Who is Jim Rouse? 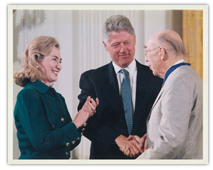 Jim Rouse had a profound influence on the built environment of the United States. In 1995 he received the Presidential Medal of Freedom in honor of his half century career. President Clinton hailed Rouse as an American hero who helped “heal the torn out heart” of America’s cities.

Rouse was born in Easton, Maryland, on April 26, 1914. He began his career at the Federal Housing Administration, started his own mortgage banking firm in 1939 and expanded into development in the 1950s. In 1958, he was tapped to lead ACTION (American Council to Improve Our Neighborhoods). By the late 1950s, Rouse had developed Harundale Mall, the first enclosed shopping center on the East Coast.

Rouse served on President Dwight Eisenhower’s Task Force on Housing in 1952 and on President Ronald Reagan’s Task Force on Private Sector Initiatives in 1981. In 1987, he chaired the National Housing Task Force, which issued a report that formed the basis for comprehensive housing legislation signed into law by President George Bush in 1990.

In the 1960s, he focused on the development of Columbia, the planned community in Maryland. In the 1970s, The Rouse Company developed the festival marketplace concept and opened Faneuil Hall in Boston. Rouse retired as CEO of The Rouse Company in 1979 and in 1982 he and wife Patty launched The Enterprise Foundation. At the same time, Rouse started The Enterprise Development Company to carry on his commercial development philosophy.

Rouse died April 9, 1996. Pat Kennedy delivered a Tribute to Rouse at the community memorial service for Rouse held at Merriweather Post Pavilion in Columbia on April 12, 1996. Kennedy was president of the Columbia Association from 1972 to 1998. He was also Rouse’s neighbor and a good friend.

Josh Olson published a biography of Jim Rouse in 2003 and wrote Jim Rouse Made a Difference in the American Landscape – a short biography focusing on Rouse’s work in Columbia.

The graphic below traces Rouse’s career.