Columbia Association (CA) team members, the CA Board of Directors, Howard County leaders and various community members took time to recognize and thank Milton W. Matthews for his years of service with the organization Thursday night. The honors took place during a Board of Directors meeting at CA headquarters, both in-person and virtually. 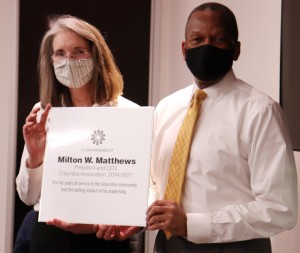 CA CFO Susan Krabbe presents Matthews with a mock-up of a commemorative plaque that will be installed near the Columbia Lakefront. 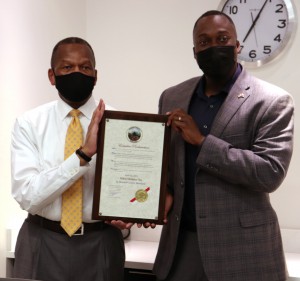 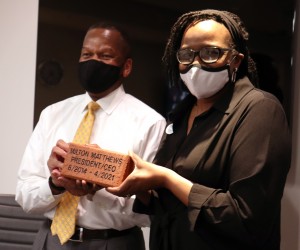 CA HR Director Monica McMellon-Ajayi shares a brick engraved with Matthews’ name and dates of service that will be laid near Lake Kittamaqundi. 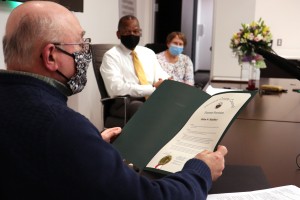 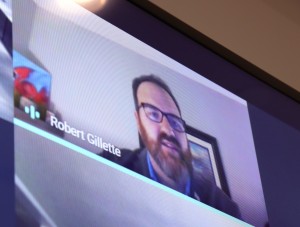 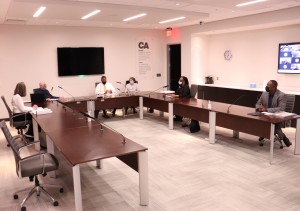 Guests physically distance during a ceremony to honor Milton W. Matthews and his years of service as CA’s President/CEO.

“Milton brought a lot of skills and knowledge to the position, but not just for us. He did it al so for the community and the county,” CA Board of Directors Chair Andy Stack said. “He’s been an excellent leader here at CA.”

Among his many accomplishments, Matthews led CA through its 50th anniversary celebrations, construction and completion of the Long Reach Tennis Club, upgrades to numerous CA facilities, improvements in open space and ongoing sustainability initiatives. In 2019, Matthews was named one of The Daily Records’ Most Admired CEOs in Maryland.

“Milton has built a distinguished and meaningful public service career during the last 40 years, including his time at Columbia Association,” said Ball. “He has provided strong leadership to Columbia while overseeing its 50th Anniversary and throughout this public health crisis. Our community is better for his years of commitment, expertise, and leadership to help Columbia thrive. We’re wishing Milton the best in his next chapter.”

Bob Gillette with the Howard County Veterans Foundation appeared virtually to thank Matthews for his work to honor area veterans. Matthews helped bring the annual Veterans Day parade from a devastated downtown Ellicott City to Downtown Columbia. This year will mark the fourth year the parade has taken place in Columbia and the sixth year for a Lakefront event that started under Matthews. Additionally, CA and the Veterans Foundation partnered to open the new Vivian C. “Millie” Bailey Park and continue to collaborate on a lasting monument honoring our nation’s veterans on the Lakefront.

“I want to personally thank you for your professionalism, your support, your guidance and most of all, your friendship,” Gillette said. “I will truly miss working with you on this great project.”

Former CA Board of Directors member Pearl Atkinson-Stewart spoke virtually as well, praising Matthews for the “community spirit” he showed throughout his tenure.

“Milton brought all of the values and commitments to build a better community. In my view, he accomplished that,” Atkinson-Stewart said. “Milton is a man of high integrity, honesty and a desire to serve. Most of all, he is a caring person. I personally feel that he has shown me that he feels that everyone is important to him.”

Additionally, a plaque will be installed by the Columbia Lakefront to commemorate Matthews’ time as CA President/CEO alongside quotes from James Rouse. CA will be able to expand that display in the future to honor other leaders who leave a lasting impact on the organization.

The organization also commissioned a brick that will be installed by Lake Kittamaqundi.

Matthews joined CA in 2014 and has served as President/CEO for nearly seven years. His last day with CA will be April 30. Lakey Boyd will step into the role effective May 1.