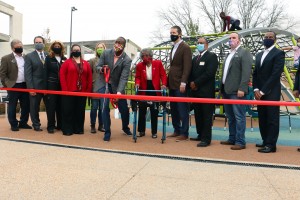 Columbia Association (CA) is honored to welcome Bailey Park to the Columbia Lakefront, another place for the community to play and grow.

CA was proud to take part in the official opening of Bailey Park by the Lakefront. The Howard Hughes Corporation ceremoniously transferred the land to Howard County Thursday morning.

A limited number of guests got to take part in the special event. CA President/CEO Milton W. Matthews and WWII veteran Vivian C. “Millie” Bailey were among those invited to speak. 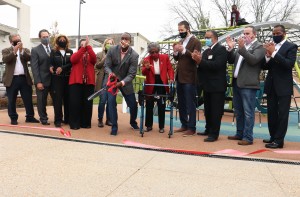 Howard County Executive Calvin Ball officially cuts the ribbon on Bailey Park, cheered on by Millie Bailey, CA’s Milton W. Matthews and many others in attendance.

“As the Downtown Lakefront continues to evolve, incorporating the existing redevelopment projects and those planned for the future, the area will become a point of destination for the region. Locally, it will continue to grow in reputation as a sense of place, special and unique with a real human attachment and belonging.”

Click here to learn more about the Downtown Columbia Plan.

Bailey Park – named for WWII veteran Vivian C. “Millie” Bailey – will be run by the Howard County Recreation and Parks Department. CA owns and maintains much of the Lakefront. 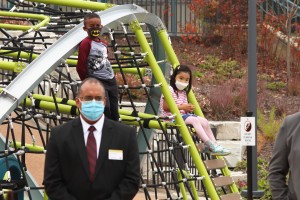 Now 102 years old, Vivian C. “Millie” Bailey – who calls Columbia her home – rose to the ranks of first lieutenant in the Army during WWII and led her Women’s Army Corps detachment.

Just days before her namesake park was opened to the public, Bailey checked skydiving off her bucket list. The philanthropist continues to send care packages to troops overseas. 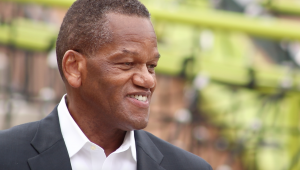 “You were my idol before that,” Matthews told Bailey, “but after that, I’m searching for new words to describe my admiration for you.” 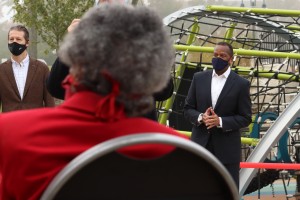 “It is my hope that as our community enjoys this new park for many many years to come, we will always remember the spirit of service of Ms. Millie,” County Executive Calvin Ball said. Executive Ball was also among the speakers at Thursday’s event.

“There’s a passion and care for this setting. On behalf of all of us at the Columbia Association, we welcome the addition of Bailey Park to the Downtown Lakefront,” Matthews said. 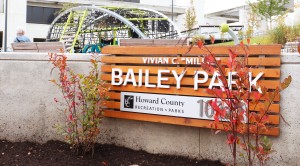 Vivian C. “Millie” Bailey Park will also be home to a veterans monument.

In addition to the park, Howard County’s Veteran Foundation is working to add a “free speech” zone and a monument to the property, commemorating those who have served in one of the most popular areas in Downtown Columbia.​​​​​