What is Pickleball and Where Did it Come From?

While pickleball has recently gained popularity, it has been around for over 50 years.

As the story goes, pickleball was created in 1965 on Bainbridge Island, Washington when Joel Pritchard and his friend Bill Bell were attempting to entertain their bored children during the summer.

The game was originally played on a badminton court, using a wiffle ball, ping-pong paddles and a badminton net. Once they found that the ball bounced well on the asphalt, they later lowered the net to 36 inches, which is more similar to the height of a tennis net. The ping-pong paddles were found to be too small so the friends fashioned their own larger pickleball paddles out of plywood.

Pickleball is said to have gotten its name from the wife of the game’s creator, Joan Pritchard. Because she loved rowing so much, Joan would often watch college regattas where the best varsity teams competed against each other. Team members who didn’t start participated in a different race that was just for fun called  “pickle boat”.

In Pickleball magazine, Joan’s son Frank says, “To hear my mother tell it, they sort of threw the leftover non-starter oarsmen into these particular pickle boats. She thought pickleball sort of threw bits of other games into the mix (badminton, table tennis, wiffle ball) and decided that ‘Pickle Ball’ was an appropriate name.” There are also some people who say the game was named after “Pickles,” the family dog.

The first permanent pickleball court was constructed in the backyard of Bob O’Brian in 1967. O’Brian and Pritchard were both friends and neighbors. By 1972, in an effort to protect the sport, a corporation was formed. The National Observer wrote about  pickleball in 1975 and by 1976, Tennis magazine had also written an article about America’s newest racquet sport.

How to make a pickleball court 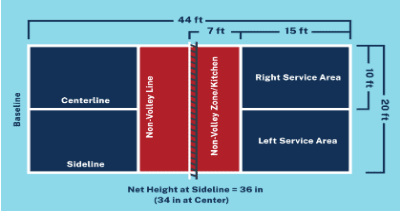 The net height is 36 inches at the sidelines and 34 inches in the middle. The court is striped similar to a tennis court with right and left service courts and a non-volley zone seven feet from the net on either side was created to discourage smashing or slamming.

The non-volley zone, or ‘kitchen,’ also minimizes running, allowing older players to be just as competitive as younger players so that children can play alongside adults.

The Rules: Learn how to play Pickleball

Flipping a coin, volleying for serve or any other fair method can be used to determine which player or team has the first choice of side, service, or receive.

When playing pickleball, you may here lingo and quirky slang like  “dink”, “falafel” or “flapjack”. Trust me, these words are worth their own Google searches.

Why is Pickleball so popular?

What’s all the pickle-buzz about?

The popularity of pickleball has grown in North America, partly driven by the Covid-19 pandemic as it offers a safe, socially distanced form of exercise.

Pickleball originally found its place among retirement communities where participants  loved it for the sociable aspect, moderate exercise or just for fun. Although pickleball is uber popular with seniors, much of this growth has been outside pickleball’s traditional demographic.

USA Pickleball membership nearly doubled between 2018 and 2021 and an estimated 4.8 million Americans now play and love the sport.

From 2020 to 2021 the fastest rate of increase was among players under 24. This increase is thought to have been driven by Covid lockdown. During that time portable pickleball nets  were temporarily sold out as people began to set up courts in driveways and neighborhood streets.Taken together, it’s safe to say that playing pickleball can be a key leisure pursuit that contributes to the well-being of older adults.

“Pickleball is the social media influencer of the sports world,” Kelly Ripa said on Live With Kelly and Ryan. “I’d never heard about it. And then I only hear about it.”

When the US Pickleball National Championships relocated to Palm Springs, California in  mid- 2010, it was no longer just a suburban pastime or a game for bored kids. The US Open even held their first ever Pickleball Championships in Naples, Florida in 2016.

Celebrities like Leonardo DiCaprio, George and Amal Clooney, the Kardashians, Jamie Foxx, Will Smith and Ellen DeGeneres have all confessed their obsession with pickleball in recent years.

Major League Pickleball was established in 2021 and is expected to expand from 12 to 16 teams, and participants could be awarded up to $2 million in cash prizes. Even superstars like LeBron James, Kevin Love, Draymond Green and  Kevin Durant have joined both Tom Brady and former women’s tennis world champ Kim Clijsters and have become owners of professional pickleball clubs.

Pickleball is one of the fastest growing and hottest sports around so grab some friends and find your nearest pickleball court. Just remember, if you can’t stand the heat, stay out of the kitchen.