Beloved “Mr. B” has shown free films for Columbia residents for decades 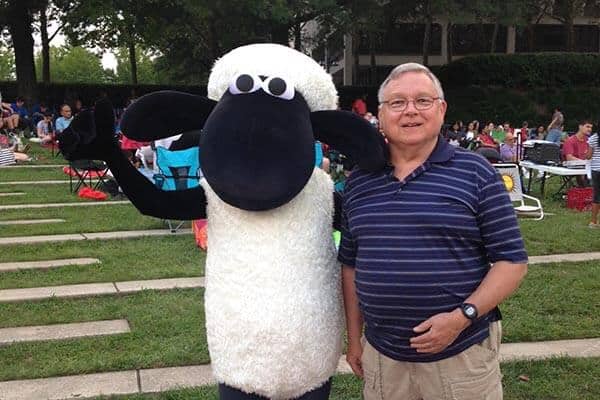 It started in 1969 with a projector — aimed at a king-sized sheet hung on a clothesline — showing a few movies over the summer in Rain Dream Hill park in Bryant Woods. Nearly 50 years later, the free film series every summer is a beloved Columbia institution.

So is the person who helps make it all possible.

Tom Brzezinski, affectionately known to everyone as “Mr. B,” was a media specialist at Bryant Woods Elementary School who wanted to share his love of movies with the community.

“I ran off some schedules of the films I was showing and gave them to some kids, and they passed them out to the homes in the neighborhood,” he said with a laugh.

The movies have long since become part of one of Columbia’s biggest annual events — Columbia Association’s Lakefront Summer Festival. And it’s still put together by Brzezinski, who coordinates the film schedule, which is now up to 25 movies each year, bringing crowds to the Downtown Columbia Lakefront twice a week on Mondays and Fridays. Monday night films are rated G or PG, while Friday night films can be up to PG-13 (see this PDF link for the complete Lakefront Summer Festival schedule of movies and concerts).

“It’s been fun doing the movies over the years,” he said. “I’ve always had a passion and love of films — I got my first projector in junior high school, and I’ve shown films ever since.”

In 1971, Brzezinski’s movie screenings got a boost from CA’s president at the time, Padraic “Pat” Kennedy, who asked him about moving the screenings to Lake Kittamaqundi. To help, CA staff mowed the field where Whole Foods Market now stands and installed a power outlet and plywood board for the sheet/screen. The Lakefront Summer Festival was born the following year.

“It’s been going strong ever since,” Brzezinski said. “We’ve been fortunate about getting some really good films. We want to show the kind of mix that families would enjoy — I always ask people what they’d like to see, and I use that as a basis to show what the audiences and patrons like. But I also show some films I think are worthy of consideration. We’ve shown several foreign language films at the lakefront.”

Each year also features a throwback choice — this year’s is The Princess Bride, which celebrated its 30th anniversary last year. It’s one of the most popular movies he’s shown, many of which have been brought back by popular demand. Some of the other repeat favorites over the years have included Cinema Paradiso, The Goonies, and — of course — Frozen, which has been a mainstay for the last few seasons. Frozen is also behind one of Brzezinski’s favorite memories of the festival.

“The first time we showed it, a little girl asked us to show the music video for ‘Let It Go’ before the feature began,” he said. “I turned the sound down, and you could hear the loud chorus of people singing along with it.”

For Brzezinski, the annual festival is a labor of love — and a chance for him to share that love of movies with the community. He also appreciates the legacy he’s built over the years of showing the films.

“The audiences are the best part,” Brzezinski said. “I’ve seen second and now third generations coming down. Parents who brought their kids that I taught, and now those kids bring their own kids.”